Jody MacDonald, Will The Real Slim Shady Please Stand Up? Latitude 53, April 30 May 29

Finding both comfort and inspiration in the Eminem rap track that shares its namesake with her exhibition title, Vancouver-based Jody MacDonald presents her own series of perverting socially constructed identities.

While the audacity and bravado does not translate from rap track to exhibition content, MacDonald offers up her own cohesive distortion of identity crises through a series of plush figurines. 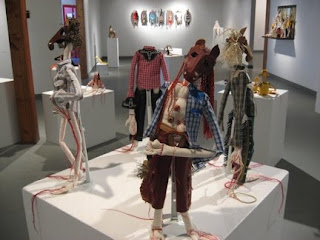 Gel transferring her own face in various shades of shadow and tone onto the cotton dolls and spending several years doing social experimentations by donning fake beards or flirty poodle heads, MacDonald suggests in her artist talk that she is more reactionary to circumstances, and it is in this discomfort where she has been guiding her work. Testing the boundaries of what is acceptable and what is not, and perverting the perceived peculiarities of self and gender, the exhibition's greatest flaw is that the works are not deeply informed, and therefore not communicating beyond surface interpretations that challenge where the discomfort is rooted. While the notion of gender and identity existing on a sliding scale is by no means a new or even provocative concept in contemporary art, I do acknowledge the existence of MacDonald's work bursts the bubbles for those who think these concepts are a given, and perhaps engages those foreign to the idea of socially constructed identities.

Creating a miniature world of androgynous dolls that are half-human, half-beast, MacDonald invites viewers to move through this maze of characters who literally wear their hearts on their sleeves and identities on their chests. Oddball humorous and morbidly crafty, MacDonald riffs off everything from twisting jargon like "Fishing For Compliments" to Jungian archetypes of self formation. Most of the individual pieces reveal this grappling of ideas and theory with the straightforward use of text demarcating which identity they are expressing. Working as a whole, their messaging carries more resonance as each character exists in relation to each other, with some alienated by or away from each other. While some works are more concerned with the immediate and surface worries of spending too much money on a purse, there are attempts to reconcile how identities like drug addicts and pushers are perceived and judged, but again, they are surface perceptions that carry no weight.

Artistically, "Shed" proved to be the most evocative work. Rendering the skinned corpse of a rabbit with all its fibrous sinews hanging from its toes and its corresponding skin casing lain languorously below, MacDonald gives form to the idea of "shedding one's skin" and conveys both the horror and exuberance of doing so.

While there is some level of critique about consumer culture, embedded within the polyester fiberfills lies an awareness of social norms that still struggles with an internalized judgment or censorship of how we should behave and what should be allowed. Rather than focusing on what people may think, the works may benefit from focusing on forming and communicating their own identities, and standing up in their own right.