“In Bloom”, Chris Bowman at Untitled Art Society in Calgary, April 30-May 21

*
In an artist statement for his recent show “In Bloom”, Chris Bowman states a devotion to "compassion and eco-centic understanding in Western social systems". He states that the main content of his work "is about representing a sample of the flowing, unified world of eco-centric relations" in spontaneous processes, even while the paintings' formal appearance relates to icons of traditional renderings of nature. Bowman reiterated these ideas in a hand-written statement upon the wall of Untitled Art Society’s gallery entrance, focusing on his perceived difference between old and recent work, that of process-driven forms (“eco-centric”) instead of controlled, premeditated forms (“anthropocentric”).

Ranging from small rectangular formats to paintings several feet high, Bowman’s paintings are based in highly skilled representational drawing and paint handling. While some of the larger paintings come off as kitschy sci-fi man-eating plants from ‘Little Shop of Horrors’, the majority of the paintings are surprisingly quick to confront the viewer with any expectations of instantly digestible beauty, yet supplying it in full. In the painting “Cohesion”, the sweetly-pink mass of foliage uses every seductive trick possible, yet has already started caving in on its very structure. Saccharine slickness and vaporous confection melt, bleed, and gape as if the human interior had been shaped from mounds of festering waste. And still, the painting remains tied to its pleasant cherry-blossom exterior, shifting in and out of the softest of painted mist. The more successful paintings of “In Bloom” continue this pattern, focusing on automatic forms rather than specific tree-figures. This formal focus and a tight cropping concentrate not only on the form of the trees, but of the medium of paint. 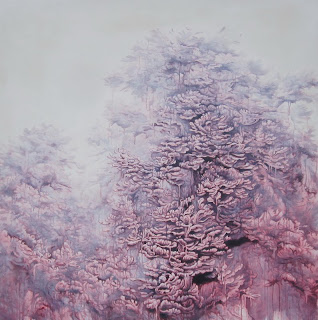 Paintings like ‘Centric’ and ‘Perception’ inherently deny the central narrative figures which might otherwise accompany such a landscape. This is mainly due to the paintings’ formal link to illustration and more nostalgic forms of art alongside traditional styles of landscape painting. In an interview, Bowman explained: “These nostalgic references range from old Greek mosaic work, to the way leaves were painted in Italy during the Renaissance, to the work of Jean-Honore Fragonard, to M.C. Escher, to the early (post war) animation.” Having lived four years of his childhood in South East Asia, Bowman also stated that he references traditional Oriental designs as well as a very 80s aesthetic. The paintings also link to the painted backgrounds of old Disney films, a style which Bowman also references: “I have grown up loving the work of California artist Eyvind Earle, who worked for Disney in the 50’s and 60’s, and was best known for being responsible for the illustration style and color choices in Sleeping Beauty.”

Also influenced by travel and a background in landscaping, Bowman spoke of the need to “consider all of the things you can’t control, and then try to find any that you can, and accept that nature owns you”. While Bowman is quick to point out an arrogance within the idea of traditional forms of beauty such as landscape painting, his work has an automatic link to techniques based within those traditional forms. His paintings’ strength lies in their ability to reference paint’s materiality without sacrificing a personally-chosen subject, yet Bowman’s statement frames the work in a language which may create more boundaries than entry-points into the work. Despite this, the paintings’ natural strangeness and knowingness creep under the skin and suggest their own rules.

Just getting better and better

..."quick to confront the viewer with any expectations of instantly digestible beauty, yet supplying it in full"...