Finding myself in Grande Prairie over an extended Easter long weekend, this Prairie Artster was undulated with an artistic inspiration that was completely overwhelming.

More so than any city or town I have yet to cross on my prairie travels, Grande Prairie’s artistic community effuses an acknowledgment and connection to their surrounding environment that is as close as I have seen of a true “prairie aesthetic.” 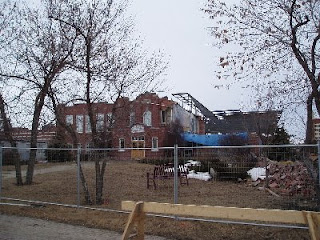 
Perhaps through sheer concentration of active artists originally from elsewhere, there is an intense awareness of what is happening regionally and nationally without ever conflating the two identities.

From collectors Murray and Chris Quinn to the copyrighted land of Peter Von Tiesenhausen, to the small handful of contemporary mixed and new media artists living scattered across the 50 000 population of mostly displaced Newfoundlanders, the greater Grande Prairie region offers a fascinating study of non inclusive isolation.

Artists visited include Tiesenhausen, one of our country’s greatest land-conscious artists; Ed Bader, tenure at the regional college and recent curator of the highly heralded ARTery exhibition (with a forthcoming catalogue by Border Crossing’s Robert Enright); Tina Martel, mixed media artist and coordinator of Prairie North, an intimate workshop with past facilitators that include Harold Klunder, Aganetha Dyck and Walter May; Ken HouseGO, a ’70s NSCAD graduate turned eclectic folk artist; Bernadine Schroyer, former U of A painting student currently experimenting past her informed training; Donna White, ex-Calgarian who will be returning to her roots just in time for a responsive billboard installation held during the Stampede; Robert Steven, new Executive Director of the Prairie Art Gallery who came on board to lead the city’s only gallery shortly before the unfortunate collapse of the building’s roof; Quinn, whose contemporary art knowledge and collection rivals in scope and in corporeal curation; and Jennifer Bowes, 2007 Biennial artist and former U of A graduate and instructor who so graciously invited me up in the first place and hosted my jam-packed three night stay.

The experience as a whole was overwhelming to say the least, and bits will have to be siphoned into separate forthcoming studio visit write-ups over the coming months, but immediate highlights include:

Murray and Chris Quinn’s contemporary art collection. Wholly unpretentious, hard-working individuals supporting their regional economy, the Quinns’s impressive collection begins the second you step foot onto their front yard. With one of Tiesenhausen’s steel rope canoe boats** air craned in, the collection from there includes seminal pieces by Evan Penny along with photographic works by Jack Burman, Roy Arden and new media works by Nick and Sheila Pye, to name just a fraction of a carefully cultivated collection.

The unwavering resistance to whine and snivel even in lieu of any proper exhibition spaces. Using public storefronts for a large-scale new media exhibition, to the salon-style existence of the gallery’s salvaged collection, to the openness in sharing work with neighbors as well as strangers, the ingrained importance of showing and discussing work for the sake of growing and learning is so incredibly strong and earnest.

The wonder of Tiesenhausen’s land accompanied by a Baltic post-Easter lunch. A balance of grounded intuition and an elevated craftsmanship, his site-specific land art dots the 800-some acre property, including functional works such as a beautifully crafted log cabin and a new straw bale studio. Supported by an equal partnership from his wife Teresa, Tiesenhausen’s life is undeniably his art, which in turn is very much about the land he grew up on and continues to raise his sons on.

how many more times can I say "prairie" in a fricking paragraph?

are there going to be many pictures from the visits?

not sure, I rarely remember to take pictures. and when I do, it seems hokey sometimes, but it also takes away from the moment I am sharing with the artist. if it fits, then for sure.

I came across this article and blog by chance the other day, and wanted to write because it's clear that your visit with the artists in Grande Prairie struck you very much as it did me: I couldn't believe the vitality and vigour of the art community there, against a lot of odds!

I had the good fortune of participating in the Prairie North Creative Residency in 2007, (I drove all the way from Southern Ontario in order to be there), where I met many of the people you mention, and formed many friendships. It's an amazing place, and the warmth and collegiality of the artists there really overwhelmed me.

The experience was so positive — from a creative standpoint as well — that I plan to go back, taking my artist-husband with me next time (after hearing my stories, he's told me he refuses to miss out again!).

I hope you will be writing more articles about the experience: from a purely selfish point of view, it allows me to re-visit vicariously, but also because the artists there SO deserve the coverage.