When Raphaëlle de Groot put out a call for objects that “you no longer need or want, and items that have become a burden,” I was fascinated, but entirely unsure of what I would find in her collection. Arriving in her space at the Southern Alberta Art Gallery, de Groot’s collection of unwanted objects entitled The Burden of Objects immediately took on a persona, creating a portrait of the community by providing a rare view of objects people had invested with emotion or fell obligated to hold onto.

Existing somewhere between the things we use everyday, the things we treasure forever and the trash we part with gladly each day, the objects Montréal artist de Groot has received occupy a materialist limbo. It is precisely the absence of necessity, love or disposability that makes these objects both specific and revealing. Many of them contain a spark of recognition, as if they could have been mine fifteen years ago, magically transported from dusty basement to art gallery.

De Groot has relocated to Lethbridge from Montréal for four months to begin this project. For this duration she will be SAAG’s Artist in Residence, collecting objects from the community, arranging them in a space at the gallery and hosting various events to encourage the public to re-arrange and interact with the objects. 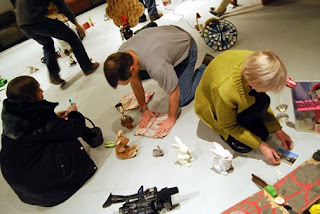 Image credit: In collaboration, a series of open workshops organized at the Southern Alberta Art Gallery as part of the project The Burden of Objects with Raphaëlle de Groot. Photo: Tricia Butt

Over the past ten years of her practice, de Groot has undertaken some ambitious projects, from working on the design of the Square des Frères-Charon in Montréal to collaborating with nuns in the piece Dévoilements. Her work refuses to be constrained to a single medium or working method, and takes immense strength from this uncompromising pursuit of ideas.

Not wanting to distance myself from the process by not participating, I hand over my personal contribution to de Groot’s collection; a dress too fantastical to be worn in public again. I am asked to fill out a questionnaire detailing the origin of the dress as well as its significance to me. Initially I think that de Groot is interested in this information for its own sake, but later I suspect that she is documenting the origins of the objects she collects because once they become part of her collection, the history they carried with them will fall away. Liberated from their past, the items will take on new meaning as they are rearranged and re-contextualized.
This strategy of incorporating any objects that are brought to her, as well as having visitors to the space freely rearrange the objects, takes some of the power to direct the meaning of the work away from the artist. In this respect, I think de Groot’s piece illustrates some of the ideas of Italian writer Italo Calvino in his 1967 lecture "Cybernetics and Ghosts". In it he argues that the reader holds the important role of creator, finding meaning by relating the symbols present in a story, while the writer on the other hand is a robot, ceaselessly combining any and all symbols present in a culture. More and more, artists such as de Groot are stepping away from narrating a single meaning to the audience, and are instead taking on the role of guides, instigators and caretakers.

One of the initial draws of this exhibition, hinted at by de Groot’s call for burdensome objects, was the possibility that abstract qualities such as love, devotion, rejection or resentment could be transferred physically into objects. Was it possible that in her collection I would be able to see traces of love and abandonment in the possessions people where surrendering?

It was of course a long shot to believe that the emotions of the objects’ owners would somehow make themselves visible. Other than their dated nature, there is no particular evidence of the objects’ burdensome relationship to their owners. The physical identity of the objects is the sum total of the burden.

The collected objects are, however, oddly melancholic; discarded toys (mainly rabbits) and small broken electrical appliances populate the space, objects that have been overlooked and neglected for a long time before being surrendered into de Groot’s collection.

Stacked one on top of each other inside the gallery space, the piles of objects become organic sculptural forms hanging off the walls or pushing out of the floor. De Groot initiated many of the arrangements herself and often rearranges things, but she encourages visitors to take the principal role in arranging and building with these objects, again allowing some kind of collective community identity to manifest itself in the project space. 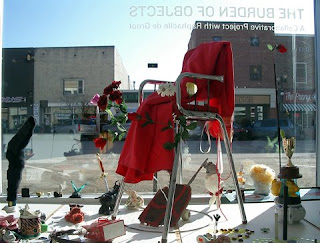 The ebb and flow of the work, as it is constantly being added to and re-arranged by visitors, becomes one of the difficulties of describing the piece. The Alice in Wonderland-like state in which I saw it, populated with many toy rabbits and fake flowers, the most frequently donated items, has no doubt by this point transformed itself into an altogether different narrative.

However, while the feelings of their owners may not have directly altered any of the objects, the collective identity of these objects does hint at certain characteristics, characteristics we pick out to love or represent our affection to others who soon loose interest, or that initially fascinate us with the promise of usefulness but instead quickly become superfluous. Toys and decorations are mainly saccharine and overly sentimental, while the abandoned electrical appliances seem to promise the future, with a certain space aged appeal. De Groot has plans to continue the piece in other locations, including Italy, and it will be interesting to see how overall qualities of burdensome objects change as different communities contribute to the piece.

In the work’s collective identity, infinite narratives are present in the ever changing accumulation of objects, each item representing the starting point of a story that connects each visitor to the previous participants. In contrasting to this, in a more material sense, as the weight of ownership for each object is transferred to the artist, the meaning becomes the singular story of the power objects have over their owners, very literally demonstrating the physical burden of accumulated objects.