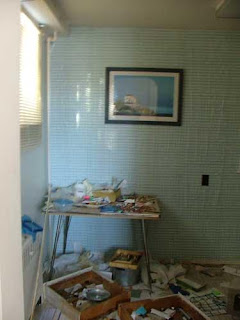 Daring, surprising, pungent, fantastic, alarming, refreshing, bold, challenging et al. Only so many adjectives can be used, correctly or not, in describing The Apartment Show. Co-curated by Tiffany Shaw-Collinge, Robert Harpin and Aspen Zettel, the dilapidated and barely inhabitable unnamed apartment at the bottom of 104St and 97Ave was, for one weekend, the vortex of a vibrant conceptual art scene rising from the underbelly of fresh post-academia ennui.
Each room in each apartment, four in total, was a full experiential sensation. Walking through the midcentury designed building, still intact with a charcoal furnace in the basement, in a city known for its transience, the building's mysteries and haunts temporarily came to life. Artists Jessie Forman, Shane Krepakavich, Gabriela Rosende, Andrea Pinheiro, Blair Brennan and Jonathan Lawson may be singled out for their attention to the atmosphere of the space (excluding Apartment 1's kitchen, which was pure living art)*. From Rosende's claustrophic and unsettling video confession, to Brennan's scavenging pack rat bedroom, to the clinically skewered non-space of Forman's kitchen, the inevitable doom, the silence of the building's previous tenants*, and the uncomfortable coziness of the building broke out in lolling chills to each passing visitor.
The apartment grounded what could have been a cold and sterile exhibit anywhere else; the history of the building and its previous inhabitants, which was the very root for most of these projects, was fully felt by artist and audience alike. The detachment between process and result was fully evident, as the building itself was exceptionally inspirational. Maybe it was only shabby chic, or perhaps something far more profound was going on; but this site-sensitive exhibition did more for the notion of "public art" than any public sculpture, mural or project has ever done.
Surrounded by a changing city, with luxury condos rising all around in a city that lulls between booms and busts, The Apartment Show proved to be a beacon of promise for individuals in this city who had all but forgotten the notion of l'art pour l'art in a time of boom.

*Although the show doubled as a fundraiser for iHuman Society, it was purely coincidental that a few iHuman youths had been squatting in the kitchen of Apartment 1 just previous to the show. Left behind besides the as-is living installation in the kitchen was some rusty blades and a bloody fork, which (I was informed) had been used to self-inflict an eye wound while coming down from an unnamed inebriant. It was seeing the bloody fork, then seeing the girl with the eye patch at the centre later, that the connection was made.

*It should be noted that two of the six apartments in the building were still occupied at the time of the show and obligingly used as the green room for artists and performers.
at 11:13:00 p.m.