Edmonton: EXPLORED pulls together five artists and collaborative teams who contributed to Edmonton’s 2007 designation as a Cultural Capital of Canada. From street art, non commercialized billboards, discreet beautification plans, to the visible and invisible interactions we experience everyday in our city streets, the contemporary artists gathered explore the underbelly of our Edmonton.

Concrete, graffiti, gravel, weeds, and boarded up buildings present themselves as the dominant aesthetic. Based entirely from a pedestrian point of view, Edmonton: EXPLORED extends a firm belief that you will never truly know a city until you have walked through it. All five projects occurred outdoors over the past year with each attempting to engage with its surroundings and individuals. These works do not look or feign elsewhere; these works try and identify the city of Edmonton by looking deep into our core and engaging with what exists.

Acknowledging the forgotten soul of the city, these are locations not recommended to tourists and visitors, but inhabited and traversed by its citizens. Edmonton: EXPLORED steps away from Edmonton as destination and focuses on Edmonton as home. As a transient city, a gateway, a hard working blue collar city, Edmonton is more complex than the tag lines of “world class city” and “city of champions” suggest. The projects address themes of social conscious and urban renewal within the ruins of Edmonton in the 21st century and the role artists play as civically minded instigators. It is within these ruins where the heart of our city beats, and it is amongst these empty derelict streets framed against wide open skies where we feel moved to engage with the people and perspectives around us. 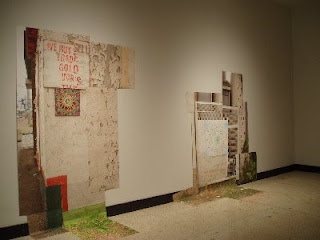 Walking along the derelict buildings and boarded up windows of once thriving shops and businesses along 118 Avenue, painter and neighborhood resident Jennifer Berkenbosch felt a correlation between herself as a new mother and this neighborhood-in-transition. Moving away from her earlier wax-based works, Berkenbosch created a series of brightly colourful mandala-like paintings following the traumatic experience of giving birth to her first child. The intricate radial designs express the archetypal cyclical pattern of life, radiating energy from within and building its energy outwards.

Having discretely planted her paintings onto a series of buildings throughout the summer of 2008 (with the support of the Arts on the Avenue coalition), Berkenbosch aimed to renew a sense of pride in the community. Noting especially the bleak recessed doorways often filled with remnants of temporary shelter, Berkenbosch wanted to create something original and beautiful for these individuals, who although may not have fixed addresses, are still very much a part of this community.

Literally adding colour to the now recognized “colourful” district of 118 Avenue, Berkenbosch’s “Radiant City” series is transformed into a compressed collage for its indoor presentation that reinforces the transitory nature of her site specific works. Re-imagining the streetscape of 118 Avenue through an engaged eye-level pedestrian, the life size paper works do not suggest the objectification of art or of the community-at-large, but are in fact reminiscent of how every community is comprised of numerous factors pieced together in all its eclectic radiance.


“Got a quarter: State of the Art in East Jasper”
Ian Mulder & Clay Lowe, 2008.
Spraypaint and Mixed Media

In the fall of 2007, graffiti artist Clay Lowe and muralist Ian Mulder facilitated “State of the Art,” an outdoor art and graffiti workshop and competition through the iHuman Society building just north of East Jasper Avenue and 95 St. Transforming the entire site into a live public art venue during the height of civic debate on the validity and legality of graffiti, Lowe and Mulder demonstrated the relevance of connecting public art with community involvement. By empowering iHuman’s high risk youths through mentorship and activity, “State of the Art” marked the first time many individuals had engaged in the discussion of graffiti and street art within a positive context.

By nature, graffiti and street art are physical tracings imbued with social implications. As a form of marking one’s territory or leaving one’s mark, the offset of most conscious graffiti and street art comes from community residents taking ownership back from hyperbolized advertising and rapid gentrification. As primarily a subversive art form starting in the 1970s and exploding into mainstream culture by the ‘80s by way of galleries and public art commissions, graffiti remains highly contestable within Edmonton as a blanket statement for all forms of public vandalism. As of April 2008, the City of Edmonton implemented a new “Graffiti Removal Plan” and Bylaw 14600 that looks to eradicate and wipe out graffiti for the safety and prospect of Edmonton citizens, architecture, and businesses.

In this site specific installation, Lowe and Mulder re-create a stretch of street art available in contemporary Edmonton from stencils, tags, and markers ranging in quality and styles. Embedded into its front are illuminated photographs, documents from the “State of the Art” workshop as well as showing works by other local graffiti artists. Inviting the viewer to physically lean in close to their facade, Lowe and Mulder prompt us to peer deeper into the creativity, communities, urban renewal, and civic engagements behind street art. 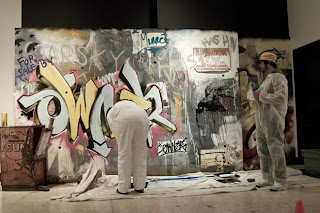 
Since last September's "State of the Art" workshop, streets once charged with a myriad of tags, posters and graffiti pieces have been buffed with tones of beige, brick red and gray in response to the City of Edmonton's new Anti-Graffiti by-law.

This piece is meant to recreate the essence of many back alleys and public spaces in Edmonton. It was submitted and installed in the gallery with a myriad of tags, spray painted stencils, and various other forms of "street art." 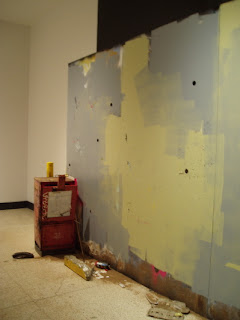 On the opening night of the exhibition, Lowe and Mulder's reconstruction of street art was buffered over live in the gallery space. What remains is a tombstone to what lies beneath as the wall enters another phase of its life in the streets. The resulting work now reflects the state of street art as civically and legally decreed in Edmonton 2008 and raises the issue of street art and its struggle to exist.

For those who did not see the original work, your desire and curiosity are shared throughout our city streets.

Artist, writer, and activist Ted Kerr took a series of 60 Polariods featuring immigrant women as part of his project, “Towards Seeing Everything.” Aimed at encouraging discussion and bringing awareness to the role non-governmental organizations (NGOs) play in our city, Kerr teamed up with four non profits organizations, HIV Edmonton, Mile Zero Dance, Chrysalis, and Changing Together to create an original new work for each organization.

This series of Polaroids was created for and with Changing Together, an Edmonton based organization run by immigrant women for immigrant women and their families as they transition across cultural and bureaucratic borders. Kerr, along with project advisor Kathy Ochoa, approached familiar and unfamiliar women and asked them if they can take their photograph, and if so, if she can write down her first name, country of birth, and role in society down onto the Polaroid.

Choosing to use Polaroid film for its immediacy and transparency, where the women can hold the result and physically write on the photo, Kerr found the most successful locations for approaching women were the random encounters on the street rather than the planned meetings, nodding to the vitality and diversity on any urban city street. Addressing both race and age in this series, Kerr enlarges each woman’s presence on an individual basis (and byway enlarging the collective presence) as he continues his ongoing exploration of clarifying the (in)visible in this city. 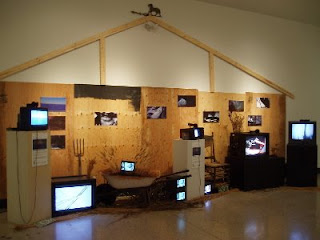 Beginning with the question of “What defines an environment to an individual?” experimental filmmaker aAron Munson and electro-acoustic musician Mark Templeton begin a collaborative investigation through sight and sound. Their visual and audio perspectives specifically focus on the associations and ideas of place and direction. Creating works that contemplate North, East, South, West, Sky, and Earth, Munson and Templeton explore how perception impacts our understanding of place.

Shot and recorded in and around Edmonton, the individual tracks conjure Munson and Templeton’s personal associations of isolation, expansion, growth, energy, and decay. Grounded in an emotional and psychological framework, “acre loss” as a whole presents a vast and complex notion of space that addresses both the natural and unnatural.

The urban construct falls away into a multitude of endless factors and sensations contributing to our everyday existence in the city, from an examined crack in the sidewalk to the shadows cast through one of the many bridges we may cross in our daily commute. Trivialized experiences and lived-in engagements, as perceived and filtered by Munson and Templeton, inform and construct “acre loss,” and hopefully, extend our perspectives within the city around us.

Trained as a fine art printmaker and holding a MFA in printmaking from the University of Alberta, Monica Pitre installed two billboard-sized works in the spring of 2008 in central Edmonton. Locating one above a street-level used car dealership on 105 Street just north of 103 Avenue and the other one here on 101 Street just south of 106 Avenue, Pitre’s works were anonymously exhibited with the exception of the Edmonton Cultural Capital logo. Choosing locations in Edmonton’s inner city, near where she works and frequents on a daily basis, Pitre’s main interest was to contribute a positive sentiment into the community and to reach a greater viewership outside of a formalized gallery setting.

As private spaces confronting public viewers, billboards have become unnatural focal points--especially against our flat horizon dotted with low rise buildings and wide stretching roadways. Primarily targeting motorists in our pedestrian-unfriendly city and selling, if not reinforcing, mentalities often through gratuitous sexuality, billboard spaces have largely ignored the communities and individuals around them, imposing their messages to unwilling viewers who are simply commuting through their city.

It should be noted that the unidentified woman in this unstaged photograph of the billboard installation walks on unaware of the billboard space, grown numb to the visual bombardment of marketing messages that have unlikely appealed to any individual within its vicinity. Looming over the deserted sidewalk and gravel parking lot in the heart of our city’s downtown, this image captures that for once, a billboard space can be conscious of its immediate public and that a privatized public space can be engaging in something pure and uplifting.